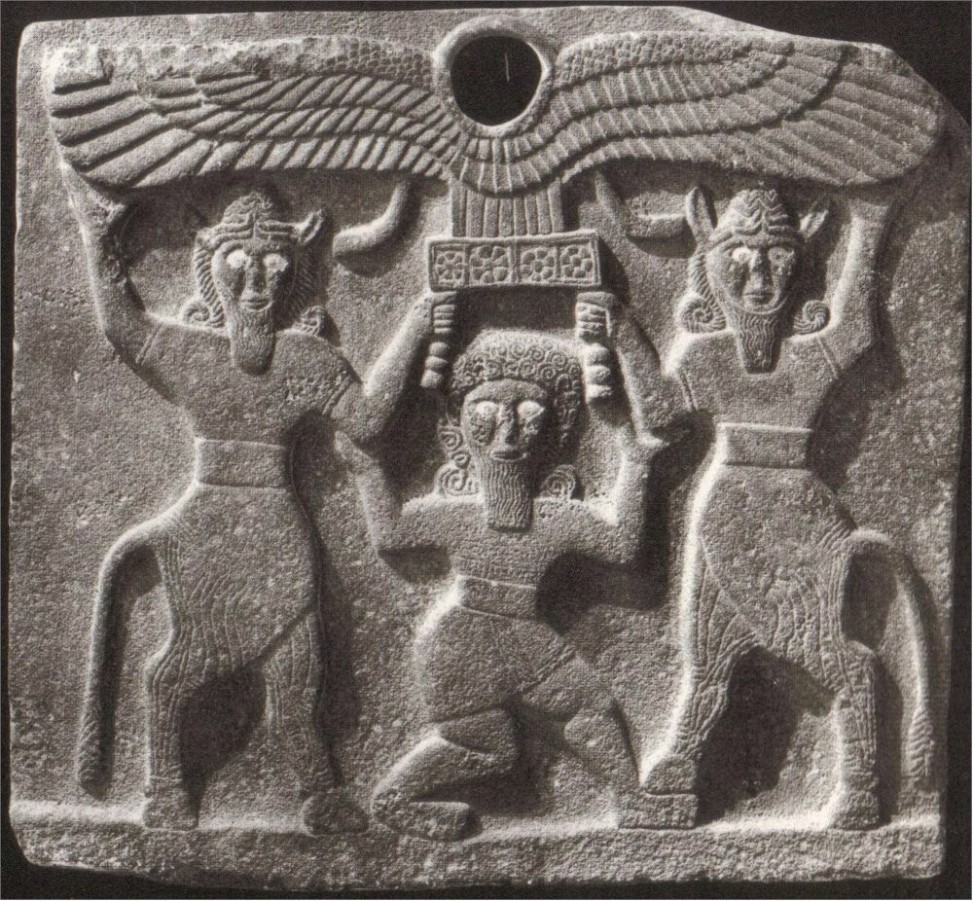 King Gilgamesh Holding Winged Sun Disc with Two Bull-men This piece, currently residing in the Aleppo Archaeological Museum, in Aleppo, Syria, is a relief carving of Gilgamesh, King of Uruk, supporting a winged sun disc between two bull-men. The depiction from Syro-Hittite stele was uncovered in Tell-Halaf, Syria, which would have been the ancient city of Guzanan. It is dated to approximately the 9th century, B.C.E., placing it within the confines of the Sumerian civilisation. This tablet is one of the many unconnected lyrical pieces that were later adapted to make up the Epic of Gilgamesh by Akkadian scholars between 2150-1400 B.C.E. The composition of the tablet is balanced out rather well as the bull-men equalize either side of the carving. While the characters are carved simplistically, rhythm is presented through the feathered texture of the sun disc as well as the pattern of the men’s clothing. For reasons unclear, the eyes of King Gilgamesh and the two bull-men are painted white with prominent black pupils which contrasts them significantly from the naturally soft beige colour of the stele. In Mesopotamia, as well as the other regions that made up the Ancient Near East, the symbol of a winged sun disc was used to represent divinity, royalty, and power. As King Gilgamesh was believed to have been a demi-god, this association is logical. According to the Sumerian King List, Gilgamesh possesed super-human strength and reigned over Uruk for about 126 years. Evidently, his legacy would reign on for centuries through the timeless works of Sumerian citizens as such. Citations: http://www.jasoncolavito.com/epic-of-gilgamesh.html https://en.wikipedia.org/wiki/Winged_sun http://www.gettyimages.ca/detail/photo/gilgamesh-king-of-uruk-detail-from-syro-high-res-stock-photography/479642885 http://www.assyrians.n.nu/8 https://en.wikipedia.org/wiki/Tell_Halaf http://hubpages.com/hub/The-Role-of-Women-in-the-Epic-of-Gilgamesh