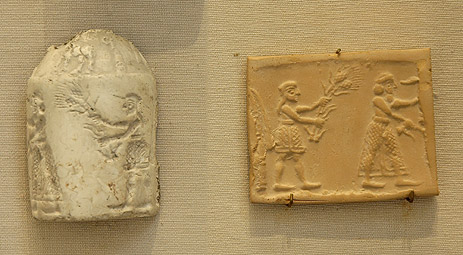 This is a supporting image on “Nisroch”.It’s a Cylinder Seal from the Uruk period depicting the ruler who may have been called “en”. En is playing the role of a shepherd where he is feeding his sheep or cattle. In his hands, it look like he is holding wheat head, symbolizing healthy crops.Therefore, calling upon Nisroch the god of agriculture would have been irrelevant. Nisroch was only prayed to in times of drought.