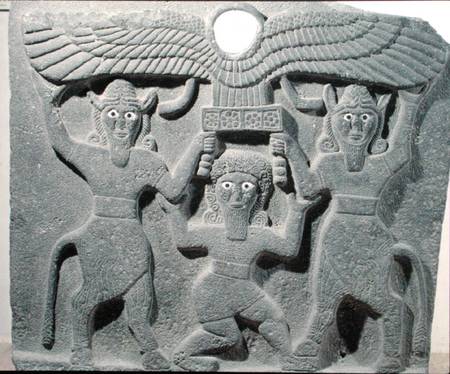 This relief is depicting Gilgamesh, the king of Uruk, between two bull-men supporting a winged sun disk. The depiction from Syro-Hittite stele is dated to approximately the 8th century BCE during the Sumerian civilization placed around Mesopotamia, Egypt, Persia and Anatolia. This tablet is one of the many unconnected lyrical pieces that were later adapted to make up the Epic of Gilgamesh by scholars around 1900 BCE. For reasons unclear, the eyes of King Gilgamesh and the two bull-men are painted white with prominent black pupils, which contrasts against the soft beige colour of the stele. They have patterns in their beards, skirts, etc. that are high in detail portraying the aestheticism of that time period. This is a well balanced carving; the two bull-men on either side of Gilgamesh balance the picture out nicely. The “relief depicting Gilgamesh between two bull-men holding a winged sun disk” is held at the National Museum of Aleppo in Syria. It was found of the ancient city of Guzana (now Tell-Halaf, Syria) in the 9th century BCE. This carving is carved out of stone. Gilgamesh was basically the first real hero depicted in old western literature ‘The Epic of Gilgamesh’ (written c. 2150-1400 BCE) . According to the ‘Sumerian King List’ Gilgamesh was a demi god with super-human strength who reigned around 126 years. With a goddess mother Ninsun and priest king father Lugalbanda Gilgamesh was a powerful and influential historical king. Gilgamesh was also also depicted as the brother of the goddess Inanna in the tale of ‘Inanna and the Huluppu Tree’ when he comes to her aid. http://www.assyrians.n.nu/8 https://en.wikipedia.org/wiki/Tell_Halaf http://hubpages.com/hub/The-Role-of-Women-in-the-Epic-of-Gilgamesh