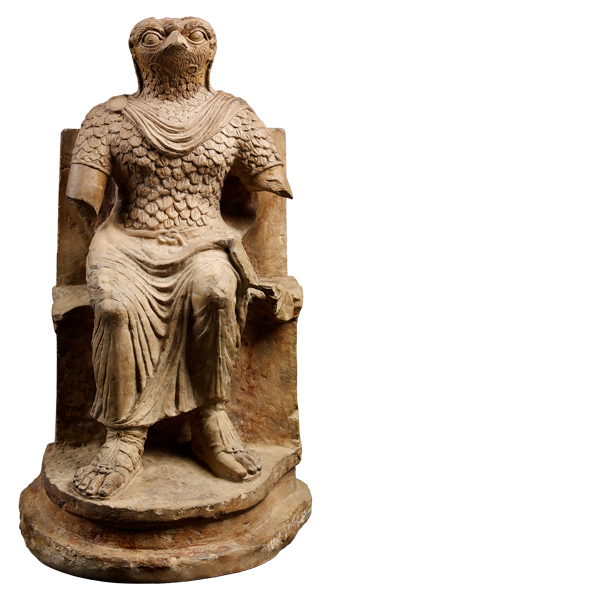 Horus 3000 BCE Horus was one of the sky gods of Ancient Egypt. He had the body of a man and the head of a falcon and he wore the crown of Upper and Lower Egypt (Ancient Egypt). One eye held the sun, power, and the other the moon, healing (Britannica). He was known by fifteen different names, often dependant on how he was depicted. He was the son of Isis and Osiris and was often portrayed sucking his thumb or Isis; at this time he was known as Harpokrates. When he was called Harmakhis he embodied the rising sun which represented immortality or resurrection. Horus defeated Seth, the ruler of Lower Egypt, with a staff that had a falcon head on the top. Horus had several children who were born of a lotus flower (Ancient Egypt). The sculpture has him sitting, his chest has feathers etched into the limestone and the fabric on his legs drapes naturally. There once was colour but it has been eroded off leaving only a few traces. The statue stands 54.5cm by 31.8cm found in the British Museum (British). Horus has been dated to roughly 3,000 BCE but since he is a god his stories may predate that. The prominent colour used is yellow with red and gray. Horus has been roughly dated to 3,000 BCE but the stories often predate images. He is looking straight forward is walking in that direction. This particular image does not seem to be in a museum. Works Cited Ancient Egypt: the Mythology. Horus http://www.egyptianmyths.net/horus.htm Encyclopedia Britannica. Horus-Egyptian God http://www.britannica.com/topic/Horus The British Museum http://www.britishmuseum.org/explore/highlights/highlight_objects/aes/l/egyptian_god_horus_sculpture.aspx