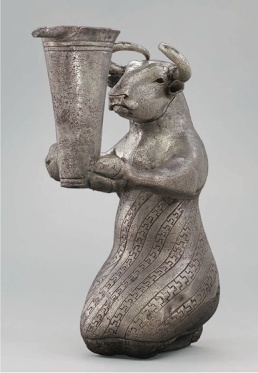 The “Kneeling Bull Holding a Spouted Vessel” is a silver hybrid figurine that curiously blends together both traditional human and bull characteristics. It measures 6 7/16” x 2 ½” x 4 ¼” and the crevices of the design in the silver have a darker tone. Perhaps this was an intentional detail of the original figurine or merely a product of aging. The silver bull is poised in a kneeling position raising a spouted vessel outwards in what seems to be a form of prayer. The position of the bull is typical of the figural art style common around the ancient Mesopotamian city of Susa. According to the Metropolitan Museum of Art’s website, placing an animal in a humanesque stance as such was a common practice in Proto-Elamite art. The kneeling bull figurine was uncovered in Southwestern Iran and dates bates back to approximately 3100-2900 BCE. It was found encrusted in a layer of corrosion waste and traces of fabric were discovered on the piece. It is for this reason that even though the function of the piece remains uncertain, it is believed to have been buried intentionally, perhaps during some form of ritual or ceremony. The Kneeling Bull had been purchased in 1966 from K. Rabenou Ltd., New York, by the Metropolitan Museum of Art, located in Britain where it resides to this day. http://www.metmuseum.org/toah/works-of-art/66.173 http://www.metmuseum.org/collection/the-collection-online/search/329074 http://ancientpeoples.tumblr.com/post/52802401991/silver-vessel-in-shape-of-a-kneeling-bull-holding https://en.wikipedia.org/wiki/Proto-Elamite