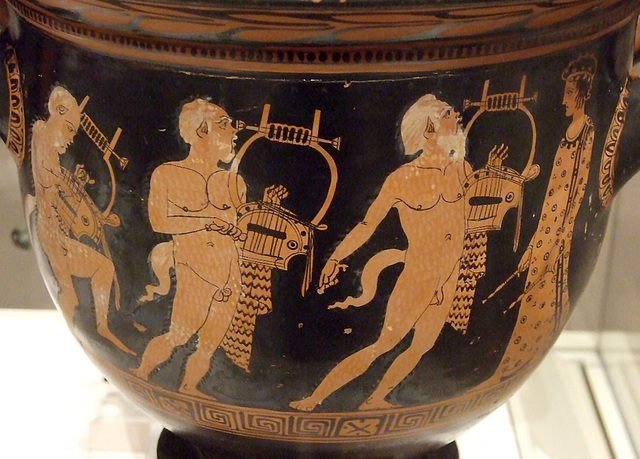 This piece is called a bell krater and it is made out of terracotta. It is painted in the attic red-figure style and is attributed to Polion, an active painter during the Red-Figure Classical period, around 420 BCE in Ancient Greece. In height, this piece of pottery reaches 11-5/16 inches high. The Metropolitan Museum of Art held this piece for a period of time (however, I no longer believe it is there). According to the Met’s website, this bell krater was used for mixing water and wine. The vase offers up a narrative consisting of three old satyrs (otherwise known as Papposilenoi) all holding, or playing, lyres walking toward a man carrying a pair of flutes. The Metropolitan Museum of Art’s website also states that “These are costumed performers who played some part in the festival that took place annually in honor of Athena, the patron goddess of Athens.” This beautiful piece of artwork is painted with a dark-slipped background while leaving the figures bare. This allows the redness of the terracotta to come through in the figures, hence the name “red-figure pottery.” The smaller details, such as the old satyrs facial hair, the pattern on their bodies, and the design present on the drapery held under their lyres, were painted on afterward. On this terracotta bell krater holds the inscription, “singers at the Panathenia.” https://en.wikipedia.org/wiki/List_of_Greek_vase_painters https://commons.wikimedia.org/wiki/File:Papposilenoi_Met_25.78.66_n01.jpg http://www.metmuseum.org/collection/the-collection-online/search/251846