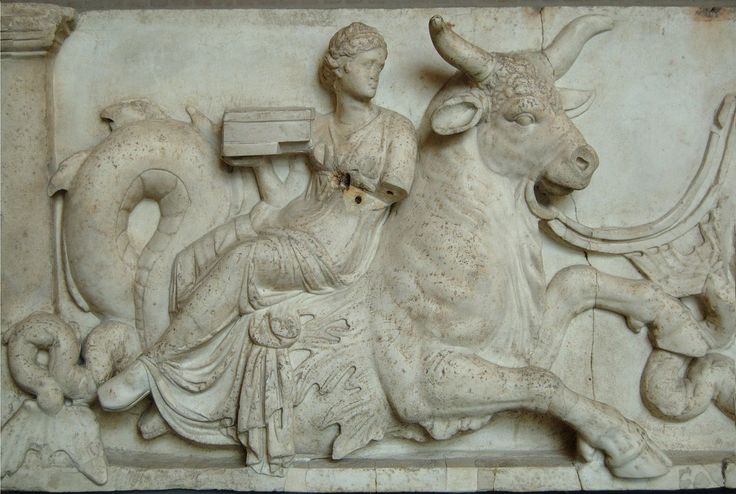 Nereid Riding a Sea-Bull Part of Altar of Domitius Ahenobarbus 2nd Century. Roman Bas-relief, Marble Housed at the Glyptotheck in Munich Here we have a part of a larger work that was found recently in the Temple of Neptune. It was under the church of Santa Maria in Poblicolis. This section is of a Nereid riding a sea-bull. The sea bull has the head and body of a bull, and a long serpent’s tail. There is a lot of details create by line. The work consists of natural lines, which contrast the geometric box the woman is holding. There are curly lines on the head of the bull giving it textured hair. The clothing of the female transitions smoothly into the decorative leaf-like band of the sea-bull. The natural lines create a harmonious and unified piece. The expressions on the Nereid and sea-bull are joyful and peaceful. Currently, the bas-relief is one colour- white based on the material. As we have discussed in class it may have been painted, but I have not find any support for that. Sources: http://www.wikiwand.com/en/Altar_of_Domitius_Ahenobarbus