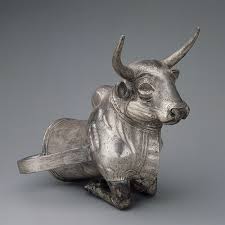 This is a supporting image of the “Kneeling Bull Holding a Spouted Vessel.” Just like the figure mentioned before hand, this drinking vessel resembles a very realistic bull. Similarly, both of these bulls are crafted into a kneeling position. It is obvious, in both pieces, that very good craftsmanship went into making these . The crevices of the bull cup are darker – perhaps from ageing as well. However, it adds a nice contrast to the silver. This piece is held at the Metropolitan Museum of Art located in Britain. This vessel (or rhyton) measures 7 x 5 x 8-1/2 “ and was found in central Anatolia. This piece of art was made out of silver in the 14th-13th century BC. This bull vessel was made in the time of the Hittite Empire, so it was common to have their gods have a drinking vessel resembling the animal that represents them. Therefore, this vessel is associated with the storm god Teshub. http://www.metmuseum.org/collection/the-collection-online/search/327400 https://www.google.ca/webhp?sourceid=chrome-instant&rlz=1CAACAJ_enCA625CA625&ion=1&espv=2&es_th=1&ie=UTF-8#es_th=1&q=rhyton