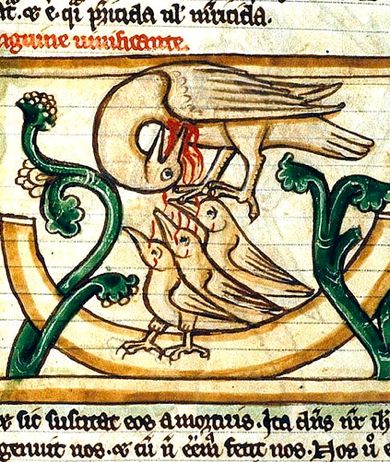 The pelican was a very popular image in medieval illuminate manuscripts and bestiaries. The iconic image showed a mother pelican piercing her own chest with her beak to feed her young with her blood. This was a symbol of Christ’s sacrifice. This idea came about when pelicans were seen jostling their huge beaks against their bodies to empty the last food out from the pouch, and then their young would eat from her beak. The original King James Bible featured the ‘sacrificial pelican’ on the first page, and this image became quite popular in medieval times. I chose this image as a supporting image for the ‘Bird killing the Snake’ from the Commentary on the Apocalypse, because this is just another place where Christ is represented by a bird. This sacrificial pelican drawing is very simply done, with a simple use of line and colour. It is not detailed, and mostly it just an outline of the figures. It was used in a manuscript, as there is Latin writing above and below the picture.