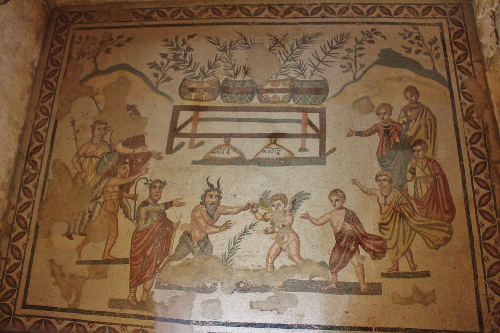 Vestibule of Eros and Pan – our preliminary

Roman Mosaic: The Vestibule of Pan and Eros. This image is a large mosaic with multiple figures. In the centre, Pan and Eros appear to be meeting, followed by several figures behind each of them, most garbed in Roman style togas. All of those behind Pan are carrying some sort of staff. Those with Eros appear to be women and children. Behind the foreground figures is a large table holding 4 jars or baskets filled with some sort of foliage, possibly palm fronds. Below the table are 2 large shapes that may be closed bags. Beneath each of the figures and the table legs is a band of darker mosaic that may represent shadows. There is an effort to create a sense of space, through the diminished size of hills in the distance on each side, but the lack change in the size of the figures toward the back of the picture seems to flatten the space. In this work, line structures the composition, including outline and details of the figures and objects portrayed, as well as creating a frame for the picture. There is a repetitive pattern of ovoids and little plant forms surrounding the story panel. The mosaic floor itself provides a background texture, and the whole mosaic is created in warm colors.