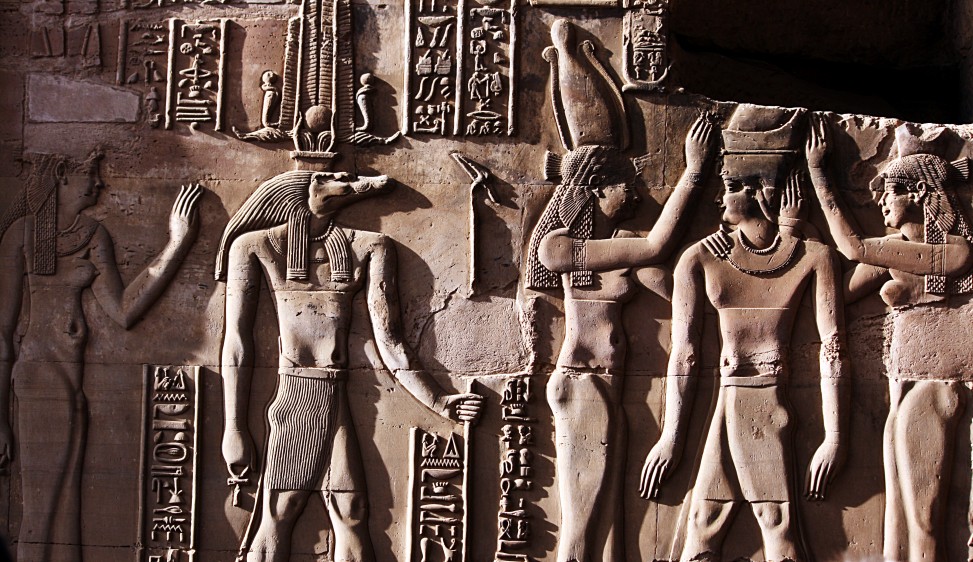 Bas Relief on the temple of Kom Ombo

The Bas Relief that is on the Kom Ombo Temple, or the Temple of Sobek and Haroeris is located in the city of Kom Ombo Egypt. It was made in 180 BCE during the Ptolemaic era however it has been rebuilt or positioned and added to during the Roman period. It remains in Kom Ombo in Egypt around forty-eight kilometers from Aswan. The outer walls were constructed of mud bricks, which is where the Bas Relief that we have been given to research was located. The temple itself was a double temple that was dedicated to the Gods. The Northern part of the temple was dedicated to Haroeris and the Southern was Sobek. The Bas relief we were given to study had Sobek present which means that it would be found in the southern part of the Temple. There are four other individuals in this picture, the first is a woman standing on her own separated from everyone else she was wearing some sort of head dress which could symbolize that she has some status but presumably very little seeing as finding information on her particularly was difficult. Next in the relief is Sobek, he is an Egyptian God who was known for protection not only in life, but the afterlife. He was also known to defend pharaohs, which would explain why he was so close to the pharaoh depicted on the Bas Relief. He was holding an ankh which symbolizes a breath of life, in the hieroglyphics it is used to represent life as well. He was wearing the crown of Amun and a skirt or kilt which symbolizes his high royal status. Sobek holding this artifact in his hand tight and behind his back would symbolize him protecting life. He is also holding a scepter with an angled sharp head, this could be used as a weapon to aid him in his protection efforts. As for the three people off to the right in the Bas Relief there are two women one of which is wearing a crown which is known as a Atef. It was used for a religious or spiritual ritual and symbolized: Truth, justice, morality, and balance. Osiris an Egyptian God known for being the Lord of the Dead. This again allows us to lean towards the theory that this Bas Relief was illustrating a ritual of sacrifice and death or transition into the afterlife. The other woman wore a headdress much like the other woman that was previously mentioned. Both of these women are facing the man who we know is a pharaoh because of his headpiece known as a double crown. This represented the pharaohs power over Upper and Lower Egypt, as well as the skirt or kilt he is wearing. He and Sobek are the only two in the Relief to be wearing them which would solidify their status. Both women are doting over the pharaoh with hands on his shoulders and crown. Due to the nature of the Temple itself and its dedication to the Gods we can assume that this image that its purpose was to illustrate some sort of sacrifice or life ritual. These aspects of the relieve are obviously associated with life and or death. We are assuming it is a sacrifice because of the naked women waiting behind Sobek. http://www.ancientegyptonline.co.uk/sobek.html https://en.wikipedia.org/wiki/Ankh https://weepingredorger.wordpress.com/2013/02/25/temple-of-kom-ombo-egypt/ http://www.ancientegyptonline.co.uk/komombotemple.html