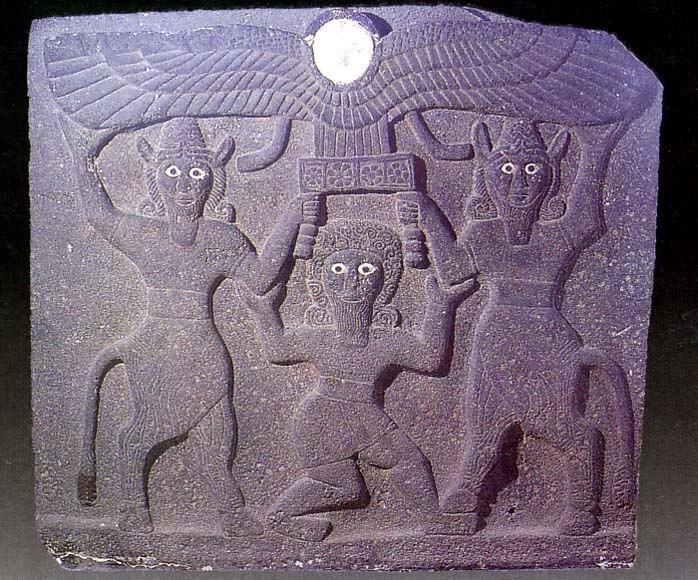 Gilgamesh and the Winged Sun

This relief is currently found in the Aleppo Museum in Syria due to a lack of information this image will go through a deconstruction into two sections sections: the Winged Sun and Gilgamesh between the Bull men. The Winged Sun is an early-stylized representation of the sun. This image represents power, divinity and royalty. The wingspan represents the rays of the sun covering the entire earth. Over time the image because a symbol of heavens. The texture of the wings draws the eye to the image, and allows the viewer’s eyes to follows the wings down to the center of the image. The bull men carrying the sun on a pedestal gives the effect of the sun being grounded directly to the earth and the people. Gilgamesh is a semi-mythic king and is believed to be two thirds god and own third human. The bull men surrounding him represent the heavenly bull he defeated because it was causing havoc. The Myth states that Gilgamesh was sent the bull beast to fight him because the Gods believed that Gilgamesh was arrogant and they wanted to teach him a lesson. The way that Gilgamesh is seen with both legs bent is to give the effect that he is in motion giving a sense of life. The entire relief is stone with the only paint being the white eyes and black pupils of the three men. The use of paint draws the attention of the viewer to the eyes of the men, as well as making these men look live and aware of their surrounding. As a whole this tablet has a narrative; Gilgamesh and the bull men are boing down and giving the heavens an offering. They are raising their offering to the gods on a platter. The direct contact of the winged sun onto the platter represents the gods receiving of the offering. Sources: http://www.ancient.eu/gilgamesh/ http://egyptian-gods.org/egyptian-symbols-winged-sun/