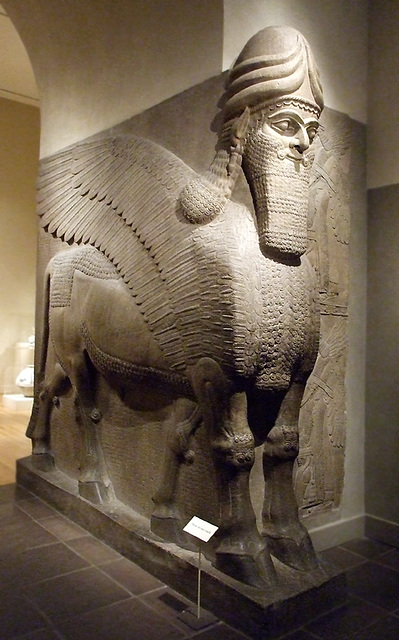 The Human headed winged bull and winged lion man otherwise known as a Lamassu was made in Nimrud (Northern Iraq) in the Neo-Assyrian period between 883-859 BC. The Lamassu were built to act as gatekeepers/ guards for the Ashurnasirpal’s Palace. These gatekeepers have five legs to give the effect of standing guard when looked at head on and striding when looked at the side. The lamassu are were almost always found in pairs – one with bulls feet and the other with lions feet – guarding the entrances to the palace. These hulking 10’3 creatures carved completely out of Gypsum Alabaster were originally discovered by Austen Henry Layard between 1845-1851 when he was excavating around Nimrud. The Lamassu were later by John D. Rockefeller Jr in 1932, to the Metropolitan Museum of Art in New York City. The visual aspect of these ancient beasts is quite vivid and complete. The figures chest beard and face contains the strongest textual appeal, the use of the stone and the strong textures gives it an intimidating presence. In contrast the decent down the legs to feet lack the same texture and the smooth surface provides a very realistic image. The use of stone allows the figure to have a very strong and firm presence, the stone gives the creature a very grounded and powerful aspect. Currently the beast is the completely colour of the stone it was carved out of, and it cannot be confirmed that the creature had been painted in the past. Sources: http://www.metmuseum.org/collection/the-collection-online/search/329230?=&imgno=0&tabname=object-information http://www.britishmuseum.org/explore/highlights/highlight_objects/me/c/colossal_statue_winged_bull.aspx