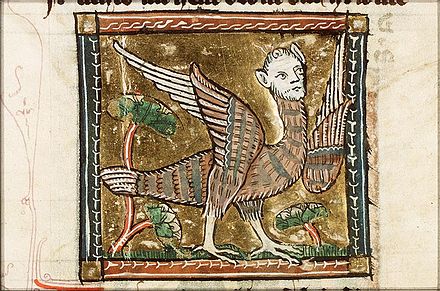 Harpy This piece of art work is about a harpy. It is a bird with a woman’s face. Direct eye line to his upper left. Pattern and repetition throughout the piece. Particularly in the border around the painting, and is the bird body of the harpy. There are white lines in its body, legs and wings and mostly the face work to highlight features. There are a lot of natural lines, with a rectangular border. Colour scheme is made up of neutral colours: Browns, greens, yellows, red-brown and white. The image is taken from an pencil, ink and water colour drawing. The wing in the right looks awkward, like the artist ran out of room. Brown fills up the background and makes it look “full”. The painting is pretty flat, and the spacing is off a bit. There are plants in the background which give it a bit of dimension, but the plant on the left is both behind the tail and rooted on the same plain as the feet. It doesn’t look real and looks like a bit awkwardly put together. This image can be found in Der Naturen Bloeme, a.k.a “the book of nature” or “the flower of nature”. The book is now held at the National Library of the Netherlands. It was written in Dutch as an adaption of the philosopher Thomas of Compre’s De Natura Rerum. It is infer that the book was originally published in Flanders. It was written by Jacob van Maerlant, a dutch poet from the 13th century. The book was written on vellum which is a parchment made of calfskin, and it was bound in leather. It was made as an encyclopedia of nature. This piece is a Medieval representation of a harpy. Source: http://www.wikiwand.com/en/Harpy