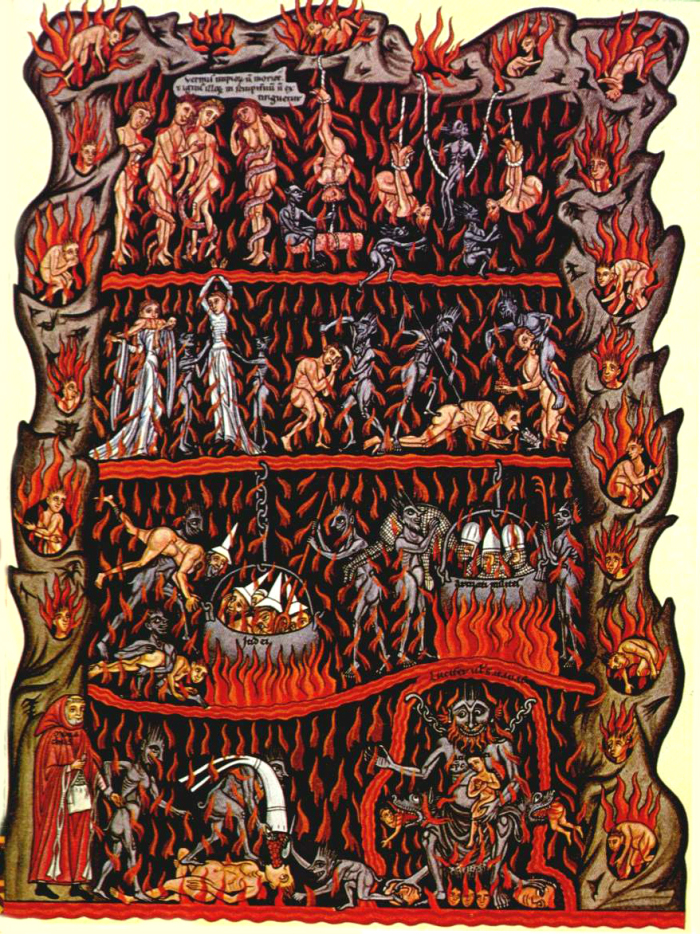 Hell illustration in the `Hortus Deliciarum`

The Hortus Deliciarum is a medieval manuscript originally written and illustrated by the abbess Herrad von Landsberg in the Hohenburg Abbey in Alsace. It was destroyed in 1870, but many parts were copied and still exist today. It´s known as the first encyclopedia written by a woman. The illustration of hell is divided into four sections depicting punishments for several sins and is now located in the national library of Hamburg. In the lowest section thrones the enchained devil with the antichrist on his knee while on the left side some demons bring a mendicant into hell. He will get the same torture as the man in the middle: the demons fill the mouth of the man on the ground with burning coins. On the second level there are two cauldrons, one is named `Iudei´(=Jews) and is filled with Jews, which you can tell from the characteristic cusp caps they´re wearing, and the other is named `armati milites` and is filled with soldiers. In the other two sections there are several people getting punishment according to the sins they did. The illustration is framed by rocks, because back in the time people thought that the hell is located under the earth. Illustrations like this were pretty common for medieval times. They were made to evoke fear and detain people from sinning.