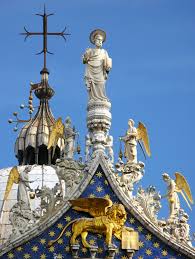 Initial Thoughts of this Statue on a Temple

This image of a statue placed atop what could be a church or a temple appears to be a very large staple of this building, The golden lion holding a scroll with what appears to be latin writing on it, with the gold stars behind it looks very mythological and magical.The angels with the golden wings would have a very signicficant impact in terms of the piece as a whole, and they appear to be holding some sort of golden basket or lattern. The man at the top of the steeple standing on a pedastool, would lead us to assume that he is the most imporant of all the characters within this piece, maybe even God himself. He dons a golden circular cap with intricate design, and there is a large Cross behind him proving that there is a very large religious influence, and that it is infact on the steeple of a church. Maybe Roman, or Italian.