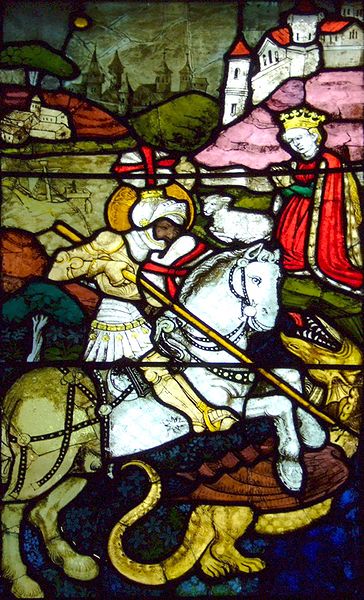 This is an image of Saint George created by Hans Acker in 1440 during the Medieval time period. He was a German Stained Glass Artist. This window is located at Lutheran Cathedral called the Ulm- Muenster which is located in Ulm, Germany. This is only a small piece of work from the larger window its self that extends from nearly the base of the floor to the ceiling. This window was created to display the narrative of Saint George and the Dragon that took place in Siline, a city in Libyia. The knight on the horse, George was coming to the defense of the princess who stood behind the battle scene. He was defending the city that had fallen to the corrol of this evil dragon, and you can this because of the dark colours used far off in the distance where there is a small town, which was previously terrorized by the dragon. There is also a ship wrecked within the water below also illustrated the torment the people of the kingdom had faced. The princess was distressed because she was going to be sacrificed to the dragon, and Saint George stopped that by slaying it. He stabbed it with his sword, resulting in its death and the King was said to have built a church over top the exact spot the dragon was slayed. There was a small body of water that emerged from the ground, the stream was said to have magical healing properties and it cured the people of Siline of the evil the Dragon had forced upon them. Hans Acker illustrated this beautifully with his vibrant colours in the forground and his dark colours in the background, as well as depicting the princess with a white face, which would represent purity and vulnerability. https://en.wikipedia.org/wiki/Saint_George_and_the_Dragon https://commons.wikimedia.org/wiki/File:Ulm-Muenster-NeithartKapelleFenster-061209.jpg