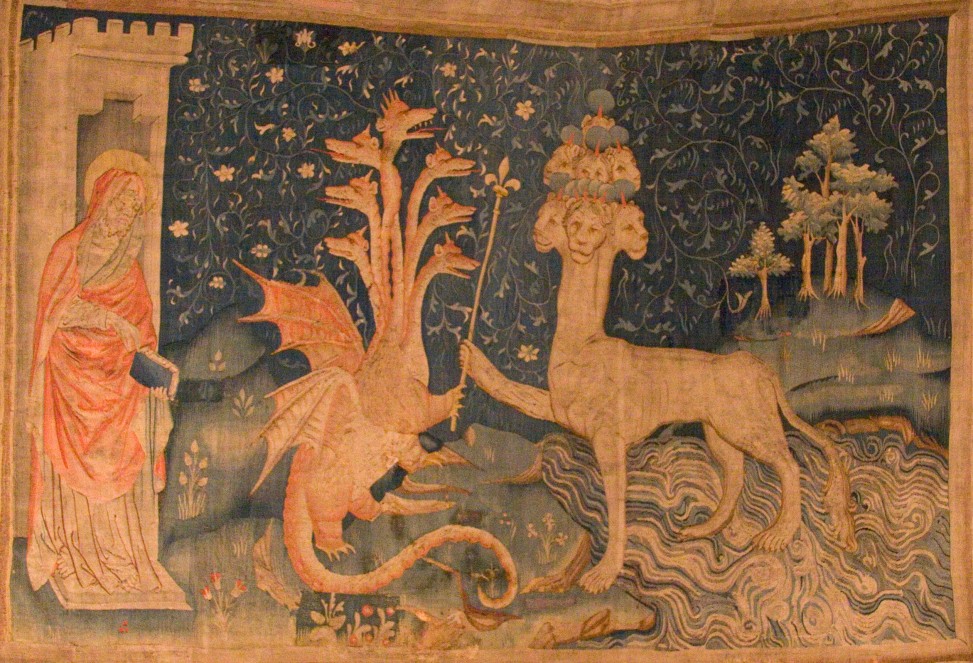 Preliminary Description of the 7 Headed Beasts

This image is striking for its strong contrast in both value and complementary colors with a very dark blue background and light, bright orange figures. The two central figures include a dragon with 7 heads in addition to its wings, short legs and snake-like tail, and a second creature with the body of a lion and seven lion heads in 3 tiers atop a long, muscular neck, which is emerging from the waves. Both of these two figures grip a single staff topped with a fleur-de-lis, and stand in a landscape with scattered, stylized plants. On the left is a robed male figure holding a book, who has a halo suggesting he is a saint, and stands in front of the only architectural feature, similar to a niche in a chapel. In the background on the right there is a hummock crowned with a grove of trees. Behind all is a pattern of vines which are flowering on the left side, suggestive of stars in the night sky. Regis says that this is a depiction from the Book of Revelation in the Bible, where a dragon emerges from the sea, and he thinks that the figure on the left is John, the writer of the Book of Revelation. The beasts are probably representative of evil. Line is used to provide significant detail on the figures, and also to delineate pattern in the background and foreground landscape, drawing all of the features into a cohesive composition. The distribution of major foreground and middle ground figures creates symmetrical balance, and the restricted palette creates a harmonious effect.