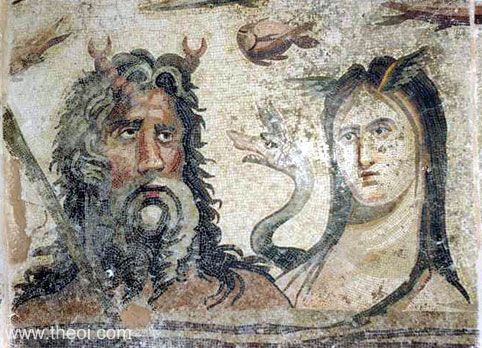 This mosaic is a depiction of Oceanus and Tethys. Tethys is the daughter of Uranus and Gaia and Oceanus is the titan god of fresh water. Originally, Oceanus was believed to be the world-ocean, which the Greeks and Romans believed to be an enormous river that encircles the world, he was the source of all water. Oceanus is depicted in Roman mosaics with the body of a muscular man, a long beard. He has crab claw horns and the tail of a serpentine instead of legs. It is said that Oceanus and Tethys are siblings as well as spouses. From their union came all of the rivers, fountains, and lakes of the world, as well as the ocean nymphs (the three-thousand Oceadids). – Oceanus was a Titanes (a male Titan deity) and Tethys was a Titanides (a female Titan deity). Tethys is the goddess of fresh water that nourishes the earth, She gave birth to the river gods. In this mosaic there is a sea serpent and fish in the background further supporting their rolls as god and goddess of water sources. This mosaic would have been created to represent Oceanus and Tethys in the House of Oceanus. The mosaic was built in 2nd-3rd century CE and was originally in the House of Oceanus. It can now be found in the Zeugma Mosaic Museum in Gaziantep, Turkey. The materials used would have been an assortment of different coloured pebbles. Sources: http://www.theoi.com/Titan/TitanisTethys.html http://www.theoi.com/Gallery/Z35.4.html http://www.theoi.com/Titan/TitanOkeanos.html