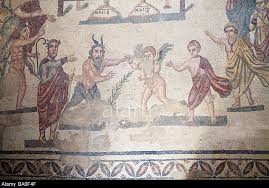 Vestibule of Pan and Eros

The Vestibule of Eros and Pan is room in the Villa Romana del Casale. It is located between the Atrium of the Fishing Cupids and the Cubicle of Children Hunting. The room is the antechamber to the Cubicle of Children Hunting. The mosaic shows a wrestling fight between Pan and Eros. Pan to the left is bearded with a goat’s horns and legs, Eros to the right is a winged boy. Between them is a palm leaf, the symbol of victory. The arbitrator of the match is standing in the front to the left of Pan. He is bearded and dressed in a purple toga over a white embroidered tunic. His right arm is raised to signal the start of the match. Above the two combatants is a rectangular table with the prices for the winner. On the table there are four rounded cylinders, which might be headdresses or vases. They are finely decorated with horizontal band and different polychrome patterns. Two palm leaves are inserted into each vase or headdress. Below the table two bulging sacks appear to be full of money. The sum, 22.000 denarii, is written on each sack. A table like it is shown in the Cubicle of Choruses and Actors. To the left of Pan is a group of three persons. In front is a satyr with a nebris, a fawn skin, over the shoulder and a pedum, a shepherds crook, in the left hand. He is pointing at the prices for the winner with his right hand. Behind the satyr stand two Maenads, young female followers of Bacchus or Dionysus. They both wear tunics, one yellow and one red, that leave the breast exposed. In their hands they hold thyrsi, long sticks entwined with ivy that are normally attributes of Bacchus and his followers. Hence this group constitute the ‘supporters’ of Pan in the fight. The followers of Eros stand to the right. Just behind Eros is a young boy, naked but for a purple tunic, his right hand stretched out towards Eros. Behind him is a little girl, likewise clad in a yellow toga. She wears a black necklace and extends her right arm towards the prices of the fight. Further to the back stands a woman wearing a red tunic with a wide black clavus, a vertical stripe and a blue palla, which is a women’s cloak. She wears a large golden ring around her neck, and also extends her right arm towards the price table. Behind this woman stand two other women, clad in yellow tunic and palla. One has placed her fingers over the mouth as if she is disturbed by the commencing fight. This group of persons does not appear related to Eros in the same way the opposite groups is related to Pan, and it has been suggested that the group to the right are portraits of members of the family of the owner of the villa. If this is so, they could be the same five persons depicted in the Entrance to the baths. In both cases the five persons can be interpreted as a mother with a male and a female child accompanied by two slaves. Such an identity cannot, however, be proven unless we know for certain who was the original owner of the villa. The overall significance of the mosaic is not clear, but it can be interpreted as a fight between profane love, represented by Pan, and the sacred love, represented by Eros, or between the rational element (Eros) and the natural, savage element (Pan). In the latter case there is an analogy with the motif in the Vestibule of Polyphemus where the intellectual power of Ulysses overcomes the savage power of Polyphemus. The mosaic is fairly well preserved, with some lacunae, but the motif is clearly visible.