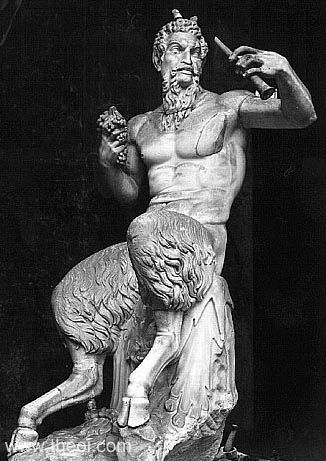 Pan was the god of shepherds and flocks, mountains, hunting, and music. He wandered the mountains and forests playing his pan-pipes and chasing Nymphs. He is depicted as a man with the legs, tail, and horns of a goat with a beard and pointy ears. His unseen presence caused feelings of panic in men travelling alone in the wild. Pan is associated with sexual desires, as he liked to chase the Nymphs until they changed form in order to get away from him. Syrnix ran and was transformed into a clump of reeds, out of which Pan made his pan-pipes that he is often depicted as playing; in this sculpture he is playing a flute. Pan appears in Greek art from around 500BCE and in these representations he is all-goat. This statue is an all-marble Roman copy of a Greek original, and is held in the Louvre Museum in Paris. It is 1.58meters.