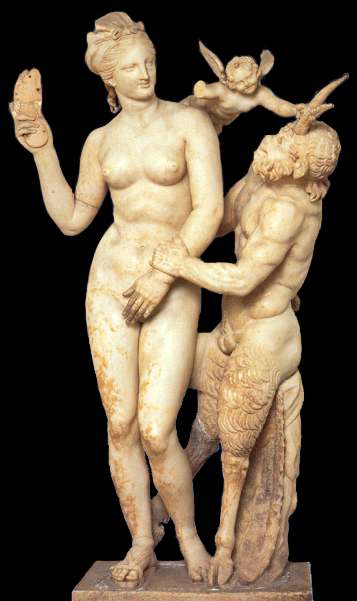 Pan and Aphrodite Sculpture of a group including Pan, Aphrodite and flying cherub. Pan is drawing Aphrodite towards him, but Aphrodite is holding her left sandal in her right hand, perhaps to ward off unwanted attention and covering her genitalia with her left hand. Incised line is used to delineate the texture of Pan’s shaggy thighs, hair and horns, as well as the bulge of muscle in Pan’s arms and chest, as well as Aphrodite’s hair and other details of their physical being. The shapes of the figures are idealized versions of feminine beauty – Aphrodite’s full breasts and hips, and well-defined waist — and masculine strength, as well as the sexually undeveloped form of the cherub. These figures are joined where Pan holds Aphrodite’s arm and where the cherub reaches between the major figures, yet there is an eloquent space between these figures created by Aphrodite’s effort to withdraw from Pan’s advances There is only moderate tonal contrast in this monochromatic carving from a pale beige stone, but this is sufficient to clearly define the figures. Repetitive texture defines Pan’s hair and shaggy thighs in this symmetrically balanced composition, where the weight of Pan’s musculature offsets Aphrodite’s height. Our attention is drawn to the contrast between the smooth texture of Aphrodite’s skin and the rough texture of Pan’s legs, horns and hair. The stone from which the figures are carved allows this contrast. Although it not be the only medium which could produce this effect, the stone admirably conveys the intended effect of Aphrodite’s annoyance with Pan’s unwelcome advances.