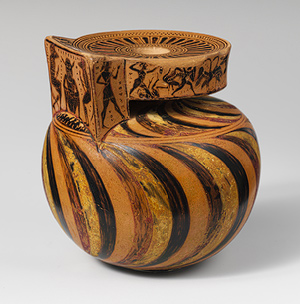 Black figure This black-figure aryballos (oil container), held at the Metropolitan Museum of Art, provides a supporting image for the red-figure bell krater. The decoration on black figure pottery is produced in a similar fashion to red-figure ceramics, but with a figure-ground reversal. In the former, the reddish clay of the image is left unglazed while the background is painted with a slip that turns black in firing. In black-figure ware, the figures are painted with the slip, while the background is left in the natural color of the clay. Whereas the earliest black-figure pottery was created in Corinth around 700 BCE, before becoming the most popular decorative style in Attica from about 625 BCE onward, the red-figure style was developed in Athens around 530 BCE, and later produced in Apulia, southern Italy as well. Both styles were traded widely through the Mediterranean area.