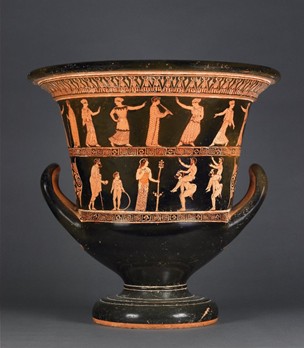 This is a calyx-krater vase. I show this to contrast with the other image of the bell-krater vase. (Krater comes from the Greek word “to mix” – these were used to mix wine and water) These are some of the largest of the kraters, made with the lower part shaped like the calyx of a flower, and the foot is stepped. It is always made with two upturned handles on opposite sides of the lower part of the bowl. The artwork on this bowl shows the creation of Pandora, a group of women, and on the bottom a family of satyrs playing ball. I chose this piece also because it depicted satrys like the original piece I was to research. This krater is held at the British Museum.