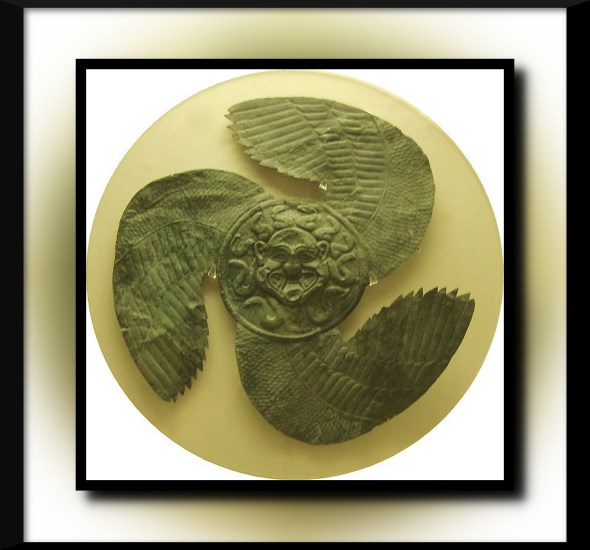 This metal piece is a bronze shield decoration, measuring 27” by 18”. The wooden structure of the shield has disintegrated. The verdigris patina of aged bronze is evident in the photograph. The decoration consists of a central medallion with the face of the gorgon, Medusa, in the centre. This form is known as a gorgoneion, and in this work it is surrounded by three wings arranged like the running legs on a triskelion. Incised lines delineate the central medallion, anchoring the image of Medusa, and also indicate the feathering of the wings, and somewhat deeper relief delineates the head of Medusa with her protruding tongue and snake hair. The relief carving of Medusa’s head creates some shadows giving a little tonal range. This is apparent also in the wings to a limited degree. The repeated and patterned progression of the wings round the centre creates rhythm and radial balance, and the whole piece has good unity. Since this was a shield cover, the Medusa image may have been chosen to frighten enemy soldiers It is held in the Archaeological Museum of Olympia in Greece that houses artifacts unearthed from the site of Olympia. This piece is among the finds excavated from the ruins of the temple of Zeus. While the open air altar of the Altis, or inner sanctum at the temple of Zeus may have been in use since the 10th to 9th centuries BCE, the temple was built between 472 and 456 BCE, and it is more likely that this shield cover also dates to the late 5th century BCE. Although the temple excavations were conducted in 1829, it is more likely that this shield decoration was unearthed during one of the later, more comprehensive excavations in 1875-81, 1908-29, 1936-43, and 1952-66 . During the last of these excavations, archaeologists were able to fix the dates of use to the 5th and 4th centuries BCE. OUR PRELIMINARY DESCRIPTION OF THE PIECE: Preliminary Description: This is a triskelion (tri-winged) round shaped disk type piece. In the very centre is a Medusa head. The wings are very detailed with line and shape and texture especially with the feathers sticking out. The head in the middle is raised and textured. It looks like it is made of metal and doesn’t look like it would have been very big. It also looks like the wings are pretty thin and even a bit bent, but the centre looks thicker. The shape reminds us of a swastika.