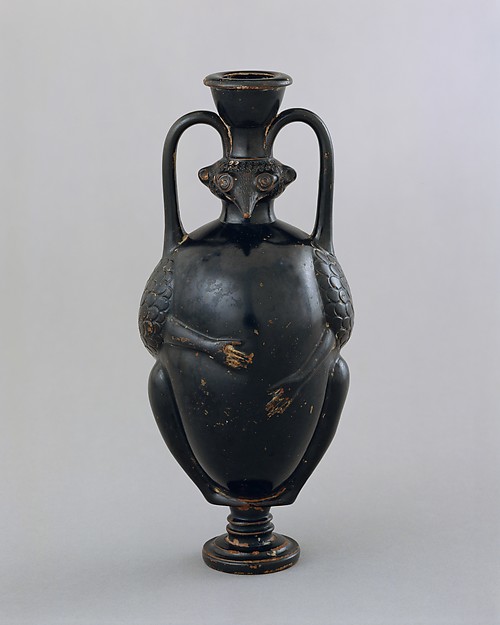 This piece is an amphoriskos, a tall terra-cotta vase glazed in black, standing only 7” high and 3 ¼” wide. It has a bird head on the neck and feather design on the wing -like raised areas of the shoulder of the vase, all of which are emphasized and given texture by use of incised line. The forearms and hands are resting on the belly are humanoid. Although some of the black glaze appears worn, revealing the reddish tones of the terra-cotta from which it was made, the amphoriskos retains the dramatic visual impact of the all-over dark glaze. This piece is held at the Metropolitan Museum of Art in New York. It is attributed to the late 5th century in Attica, and thought to represent a character in Aristophanes’ comedy, The Birds. The amphoriskos was given to the Metropolitan Museum by Mr. and Mrs. Christos Bastis, but no other information about the provenance appears in the Museum’s catalogue.