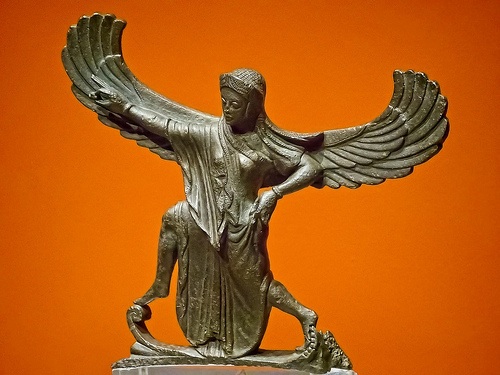 The subject matter is the Greek goddess of victory; Nike. It is a bronze statue of a winged woman made in 550 BCE. She is also holding something in her right hand which is an unknown object. The statue was most likely attached to a large vessel (bowl) on the rim being one in a series of figures. The line work in this piece is used it the texture of the wings and her dress. Her hair shows interesting texture as well being in front of her body in pieces. The line work and the stance of the figure gives a good representation of movement. The figure’s weight is placed on to the balls of her feet so it gives the appearance of flight and lightness. The movement shown in the work is harmonious and her wings are very symmetrical. You can also see her eyes are looking down so again gives the illusion of being in air. Nike is the goddess of victory so this could be some sort of representation of a trophy. The work was shown in the Portland museum possibly on loan from the British museum. It was made/found in southern Italy. It is 16cm high with a diameter (wingspan) 17cm.