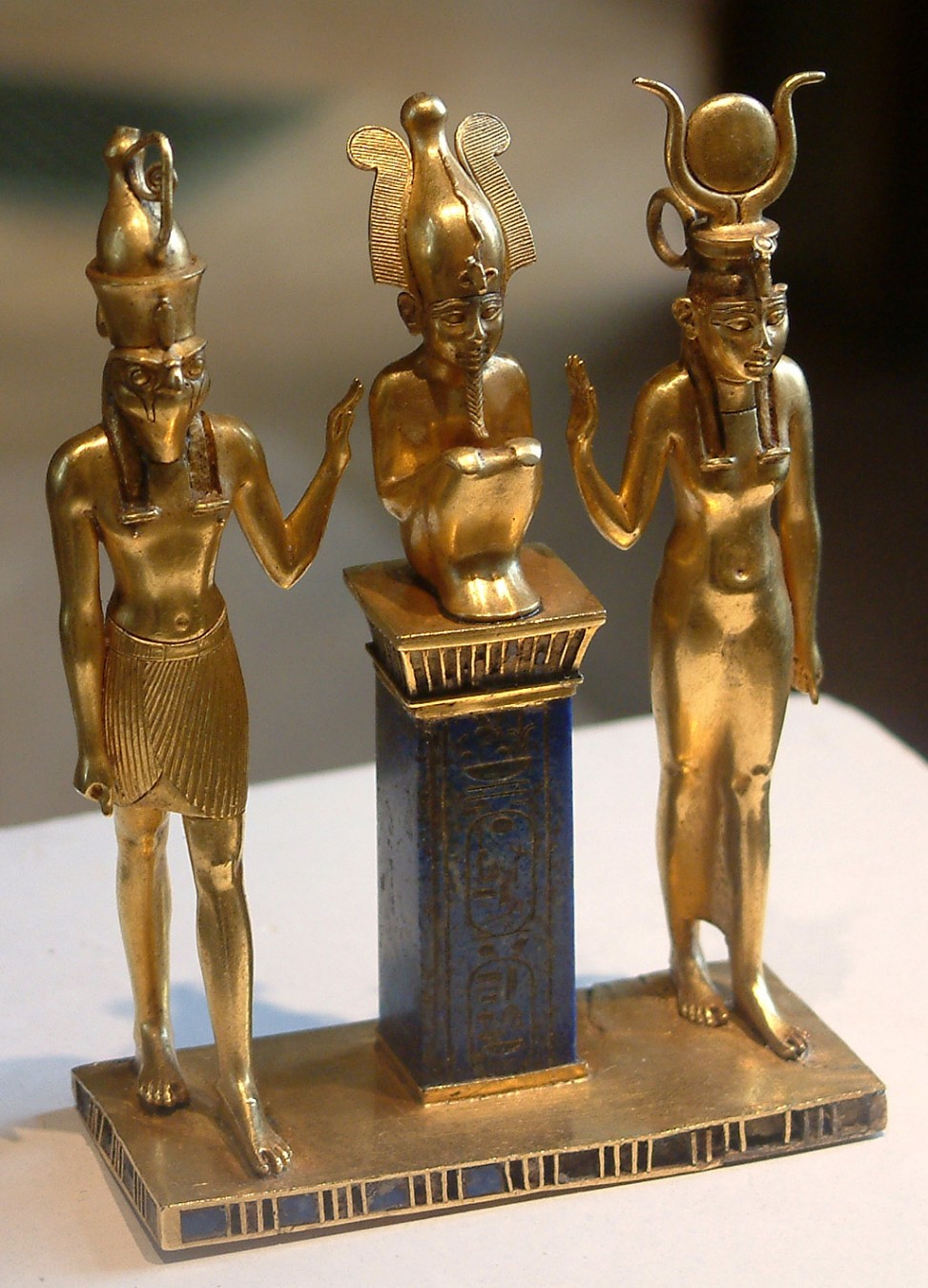 The Gold Statue of Three

This statue made of Gold and lapis lazuli is a depiction of myth of death and resurrection; the death of Osiris and birth of Horus. The myth states that Osiris was tricked into a coffin and killed by his brother Seth and Hathor They threw the coffin into the Nile where Isis – wife and sister of Osiris – found him. Seth heard that Isis found the body so he dismembered Osiris into 14 pieces. Isis searched for the pieces but could only find 13. He was missing his phallus so Isis created a new phallus and attempted to revive him. Isis was able to resurrect Osiris long enough to conceive Horus. Osiris was simultaneously alive and dead – giving him the name of God and King of the afterlife. Egyptians mined there own gold in an ancient source of gold on the Nile River. The Egyptians also mined lapis lazuli from the hills close to Coptos (a city of Thebias). This statue has 3 figures; Osiris in the middle, his wife, Isis, on the right, and his son, Horus, on the left. Osiris is crouching in order to be on the same level as his wife and son – this crouching position that Osiris is in is not common. The fact that there is three figures is significant because the number three was the symbol for plurality (the fact or state of being plural) – Even the word in hieroglyphics for plurality consisted of 3 vertical marks. The inscription on the base reads, right to left: “The king of Upper and Lower Egypt, the master of the Two Lands, Usermaatre, the chosen of Amin, the son of Ra, the lord of the crowns, Osorkon beloved of Amun”: and from left to right (opposite the previous): “I grant you the years of Atum, like Ra, I grant you encompassing bravery and total vistory, I give you countless jubilees: thus speaks Osiris Wennefer”. The statue was made between 874-850 BCE (in the 22nd dynasty) and it is 9 cm by 6.6 cm. the statue was found under a pile of older excavated earth close to Osorkon ll’s tomb, which was found by Pierre Montet during his excavations of Tanis and can now be found in the Louvre Museum in Paris France. Sources: http://www.louvre.fr/en/oeuvre-notices/pendant-name-king-osorkon-ii-god-osiris-s-family http://www.egyptianmyths.net/osiris.htm http://www.crystalinks.com/isis.html