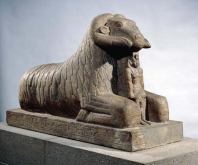 Ammon King of the Gods

Ammon was revered as king of the gods, one of the eight deities of the Hermopolite creation myth. His cult reached Thebes, where he became the patron of the Pharaohs by the reign of Mentuhotep 1(2008-1957 bce). A hybrid represented in human form, sometimes with a ram’s head. Ammon’s name meant the Hidden one, and his image was painted blue to denote invisibility. This attribute of invisibility led to a popular belief during the New Kingdom in the knowledge and impartiality of Ammon, making him the god for those who felt oppressed.