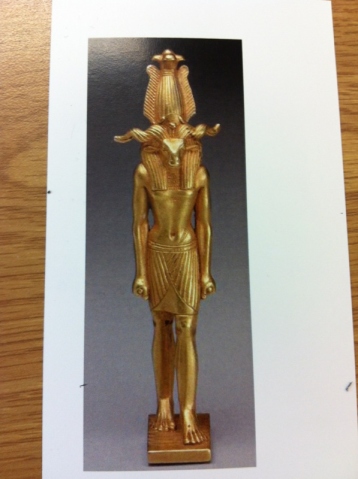 This is a gold covered statue of a man with a goat head. There is minimal texture present only in the skirt hair and headdress caused by lines so your eyes move towards that part of the statue. The horizontal lines fragment the piece into 5 different parts; legs, skirt, torso, head, and headdress. The body is proportionate due to the fact they were able to devise a system for everyone to use. The headdress looks as if it is the Atef crown with ostrich feathers on the sides. This is a three dimensional statue that is very linear, and might intended to be viewed solely from the front. The only colour present is from the material: gold. The statue is very symmetrical except for the legs with one stepping forward. Very harmonious work with the lines all of the same depth and width. The piece was probably depicting, or was used in some sort of religious ceremony due to the fact the Atef crown is on the figure, because this crown was used in such practices.