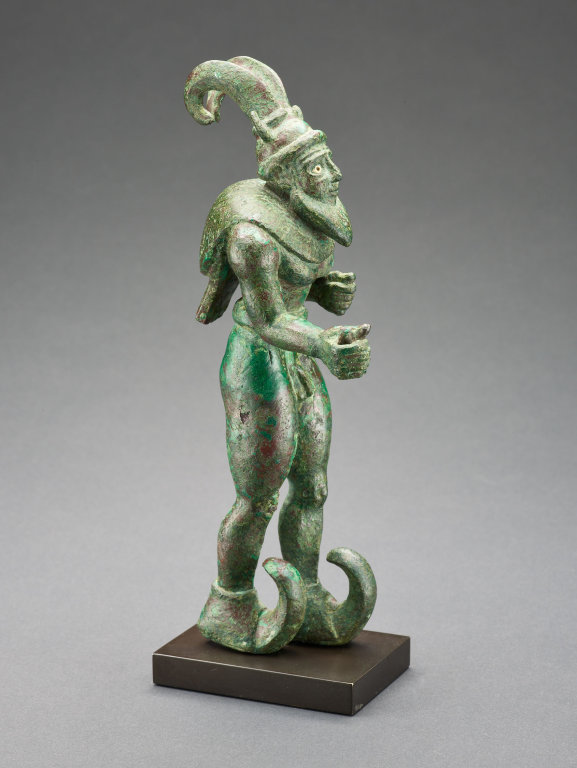 Striding Forth in Style

Proto-elamite striding figure. This artwork is a sculpture of a muscular, bearded, male humanoid figure in mid-stride, with arms flexed. He is naked apart from a cap with ibex horns and animal ears, a raptor’s skin and head cloaking his shoulders, a triple belt, and large boots with upturned toes. Incised lines are used to indicate details in the ears and facial features, and edges (lines) are created by shadows where his cape is carved away, for example. The positive shape of this three dimensional carving, and the negative spaces surrounding it, give a clear impression of movement. The work is distinctive for the repeated curves of the ibex horns and shoes, and his somewhat exaggerated musculature and his jutting beard. All of this contributes to a strong pattern of light and shadow and create strong tonal contrast that further emphasizes key features such as the horns, shoes, beard and chest. The color scheme derives from the verdigris and reddish violet color of the copper alloy from which it is made. The smooth surface texture of the work draws attention through reflecting light from the bold curves of the figure, emphasizing prominent features (headgear, musculature, beard, face). There is a visual rhythm to the overall shape of the figure, arising from the use of repeated curves (horns, muscles, boot toes). The balance is asymetrical, but the overall composition is highly organized, unitary and harmonious. The medium has contributed to the presentation of the elements, in that reflection from the polished metal surface emphasizes the curves of the figure, enhancing its appearance of muscular energy. The verdigris contributes interest and a sense of mystery. The work gives an impression of strength, energy and mystery through its composition, and through the choice of the curving ibex horns and boot toes. Although it has the shape of a strong, muscular man, it’s animal horns suggest supernatural power. The triple belt and beard, associated with divinity and royalty, further enhance the impression of powerful and mysterious character who can conquer raptors and ibex through hunting or more supernatural means. The work is held at the Metropolitan Museum of Art in New York. It is 6 7/8” (17.5 cm) tall; 2 1/8” (5.4cm) wide. The piece is associated with the proto-Elamite culture of Sumer which lasted from ca. 3400 to 2500 BC (5400-4500 BCE). It is believed to date from ca. 3000 BC (5000 BCE), and was made in the area that was Mesopotamia and is now Iran, probably in the highlands, since the upturned boot toes are considered characteristic of that part of the region. It is described in the museum literature as an image of a hero or demon, with a divine character specified by its beard and triple belt. His power may derive in part from the ibex horns and the raptor wings and body draped over his shoulders. He may be a hybrid, or may simply be wearing headgear with horns, as a shamanistic ritual costume; in either case, the association with animal forms may reflect his connection to the supernatural world. It is made of copper alloy. In Mesopotamia there were no major sources of copper, so this was imported. Afghanistan is a traditional source usually cited, and is relatively closer to Sumer than other possible sources in Egypt, Cyprus, central Anatolia and central Asia.