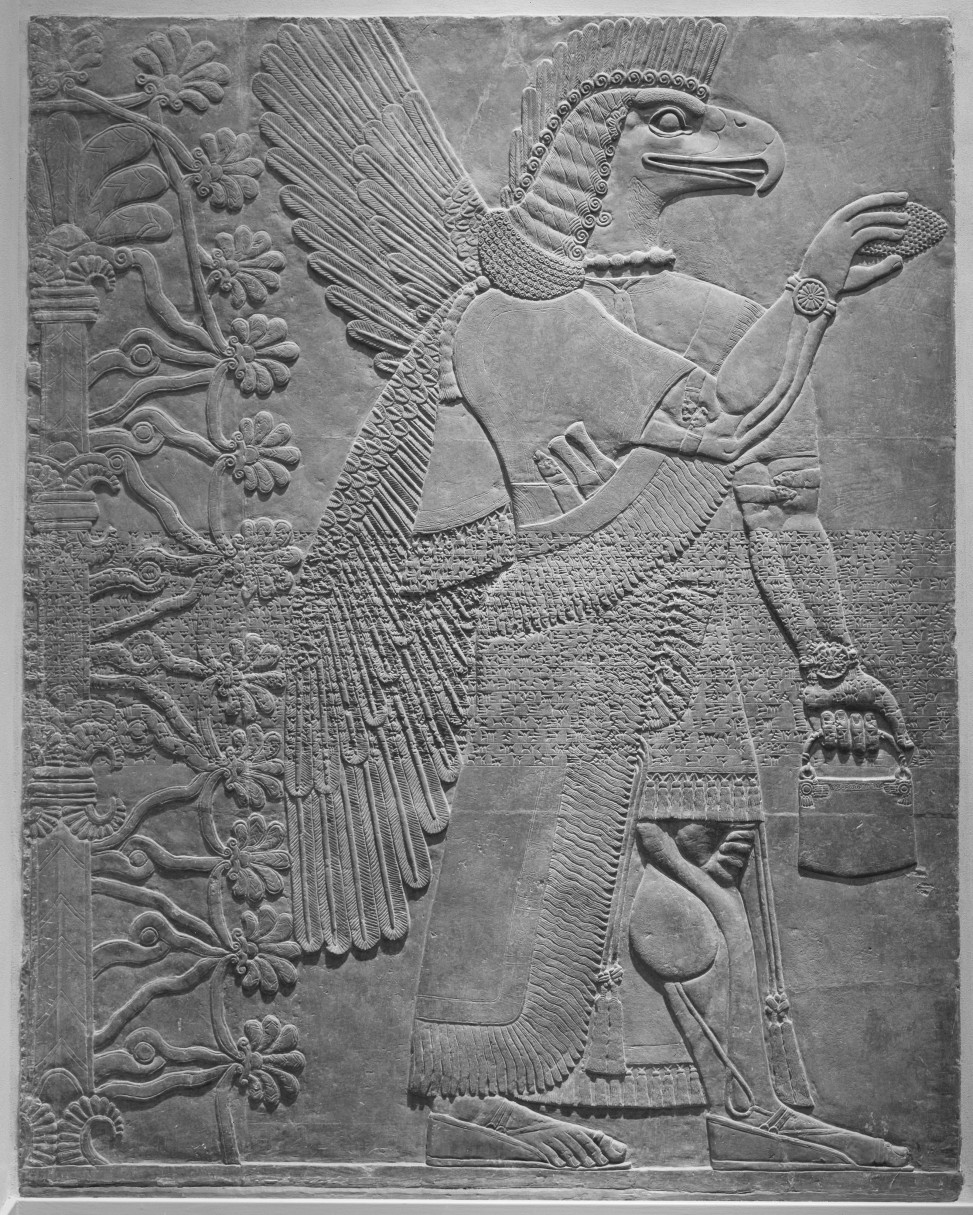 Nisroch and his pine cone sprinkler

Nisroch I. 1. This bas-relief panel depicts a hybrid creature, Nisroch,d with an eagle’s head and a human body, wearing a toga-like garment over one shoulder that reaches to his knees. He has two sets of wings. There appear to be tool handles thrust through his belt, and he wears a bead bracelet on his right hand and an armband on his left. He is the Assyrian god of agriculture, and is shown holding a water vessel in his left hand while his right hand, holding a pine cone, is raised to sprinkle water on crops. 2. Line is used as outline, to structure the overall composition, demarcate features, and create texture in the wings and garment. Texture is an important element used to draw attention to the wings, ringletted hair, garment fringe, and pine cone. Of interest, the texture of the wing feathers is also that of a seed head of grain. The work is a bas relief carved into a flat surface. There is some depth created by areas of deeper carving, and the shadows generate some tonal contrast to draw attention to the beak, hands and water vessel. Much of the figure appears fairly flat and lacking in strong contrast. The stone from which it is carved is beige, and no other colors are used. Our attention is drawn to the texture of the wings, hair, garment fringe and pine cone due to the detail and repetition in the texture. 3. There is variation between areas with and without texture that create a realistic, harmonious, asymmetrically balanced depiction of Nisroch. 4. The medium used by the artist is stone. Variations in the natural coloring of the stone contribute to muscle definition in his arms and legs, and enhance shadows in the wings and clothing; this helps make the subject appear more three-dimensional. These color gradations especially contribute to the impression of depth where lighter stone on the right arm stands out against the darker color of the left shoulder, arm and torso. This sort of effect is probably best achieved in a stone with this sort of variation, rather than wood, for example, with its more predictable grain pattern. 5. The artist is conveying a sense of power in this piece. The huge dramatic wings, exaggerated muscles, strong beak and prominent eyes all contribute to an impression of awe-inducing power. II. 1. The work is held at the Metropolitan Museum of Art in New York. 2. The work is 222.9 cm high by 187 cm wide by 5.7 cm deep. 3. The work was excavated by Henry Layard in Nimrud, Iraq, in the area that was formerly northern Mesopotamia (original cuneiform name of city, Levekh). 4. It was quite likely made at Nimrud (given its size and weigh), and is dated to the period between 883 and 859 BC (approximately 2800 BCE). 5. The panel depicts the Neo-Assyrian god of agriculture, and was probably the object of prayers for healthy crops. 6. It is made of gypsum alabaster, a type of stone typically used for depictions of deities in temples in Mesopotamia. It was probably placed indoors, since gypsum alabaster is so soft that it can be scratched with a fingernail. The material is probably of local origin, since Iraq has a geologic substrate that contains gypsum.